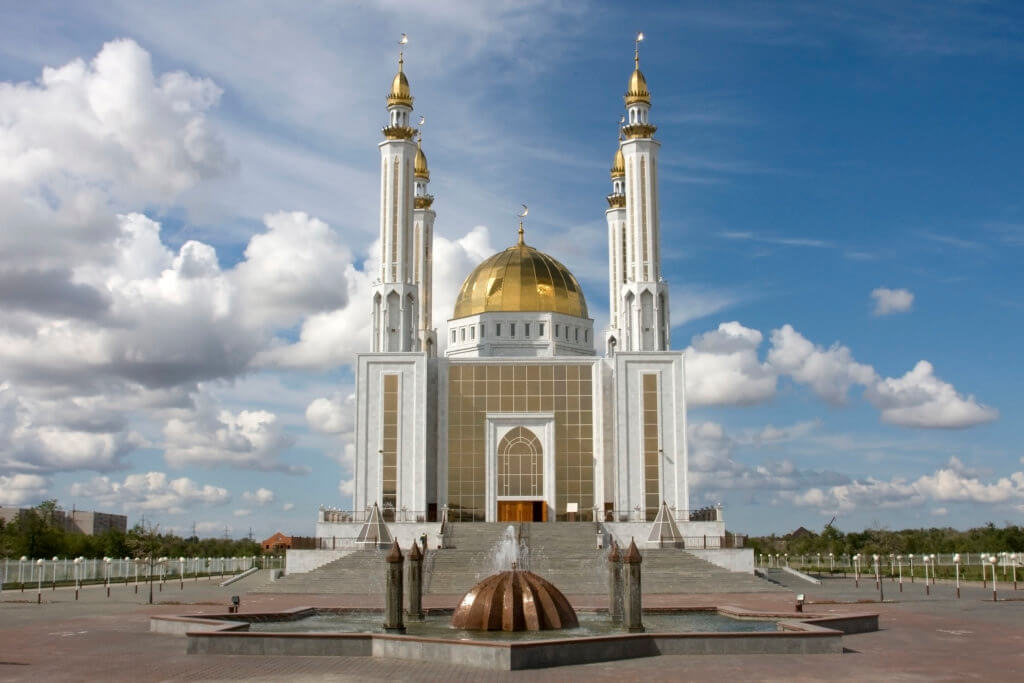 Aktobe is on the western end of the Kazakh Steppe, less than 100 km from the Russian border. As the capital city of the Aktobe Region, it has several museums, historical sites and buildings worth visiting. Read further to find out what to see and what’s nearby in our travel guide to Aktobe. History of […] 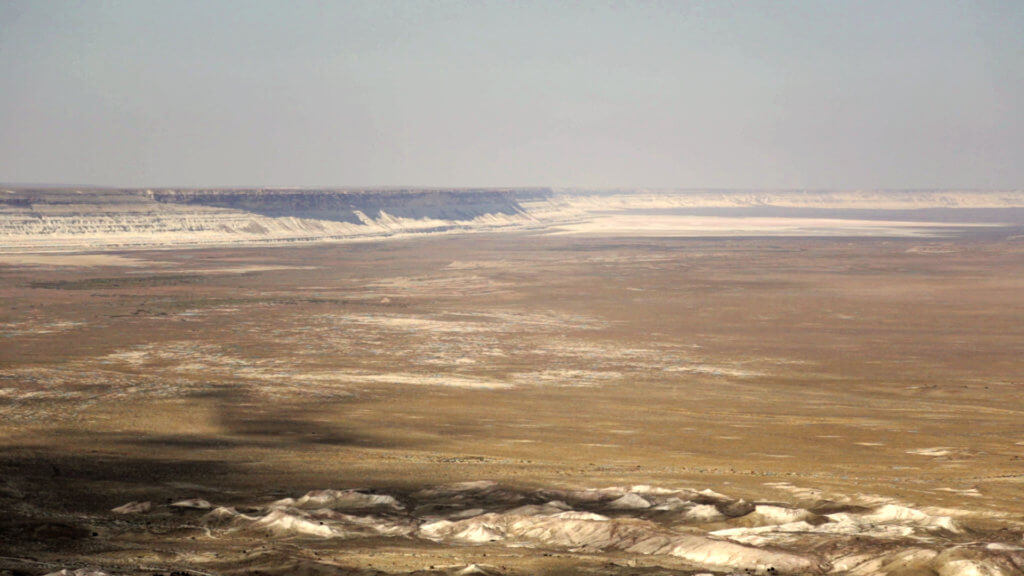 Fifty-five kilometres southeast of Aktau is the Karagiye Depression. At -132 m below sea level, it’s the lowest point in Central Asia and the former Soviet Union. Its southernmost point is several kilometres east of Eralievo town, which has a train station, and is near the E-121 and R-114 roads leading to Kuryk port. The northernmost point […] 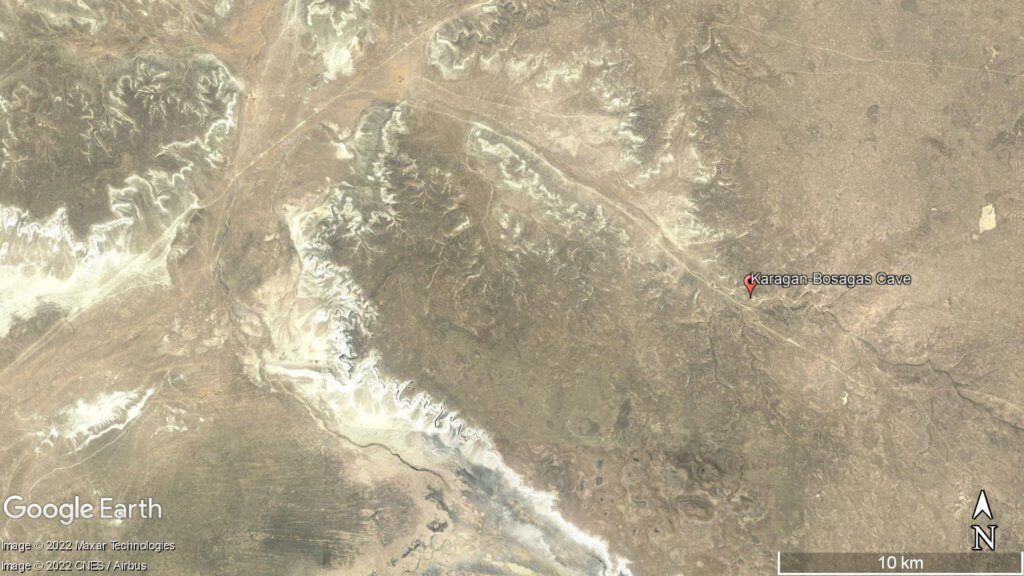 According to G.N. Amelichev’s “A Brief History of Cave Exploration in the USSR and Russia”, there are over 50 caves in the Ustyurt region. Here’s our overview of three of the best-known ones, all of which are reachable within a one to two day drive from Aktau. Balayuk Cave Forty-five kilometres southeast of the Three […] 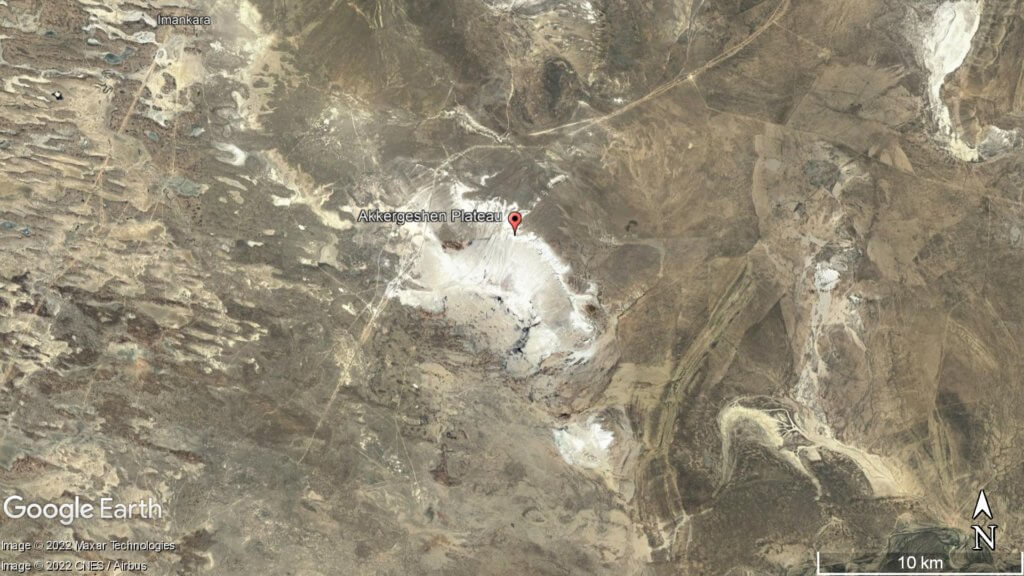 The Akkergeshen Plateau is an area of chalk upland 55 km east of Kulsary town (pop. 51k). It measures approximately 12 x 8 km and is 50 km west of the larger Aktolagay Plateau. The plateau has numerous wind-sculpted chalk formations. The most impressive ones are centred on a viewpoint in the north and have […] 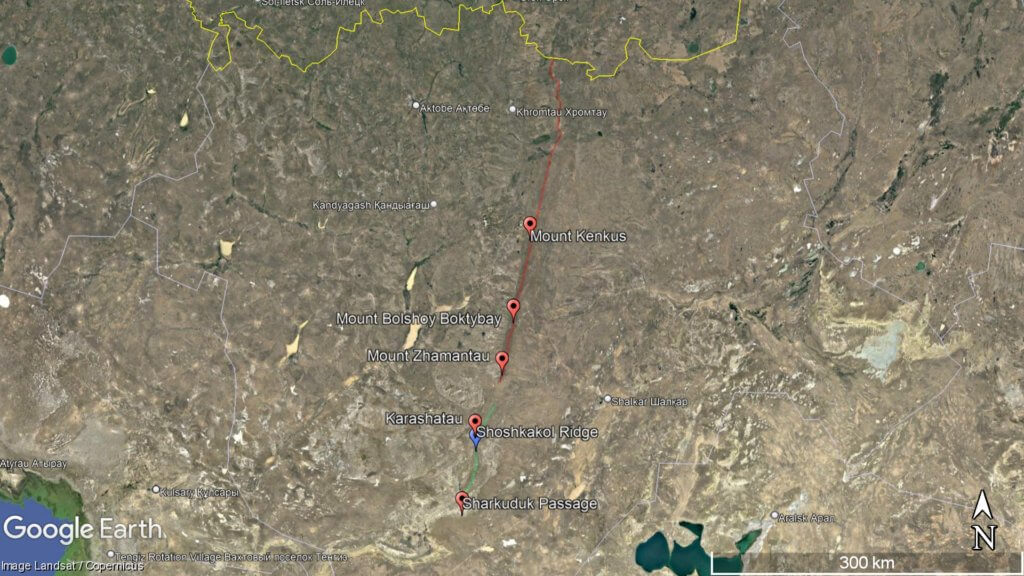 The Mugodzhar Hills form the southernmost part of the Ural Mountains. The range starts near the Kazakh-Russian border and runs south for 200km+ through the Aktobe Region, forming a geographical boundary between the Aral Sea and Caspian Sea basins. Mount Bolshoy Boktybay (657m) is the highest point. Fifty kilometres south of it is Mount Zhamantau […] 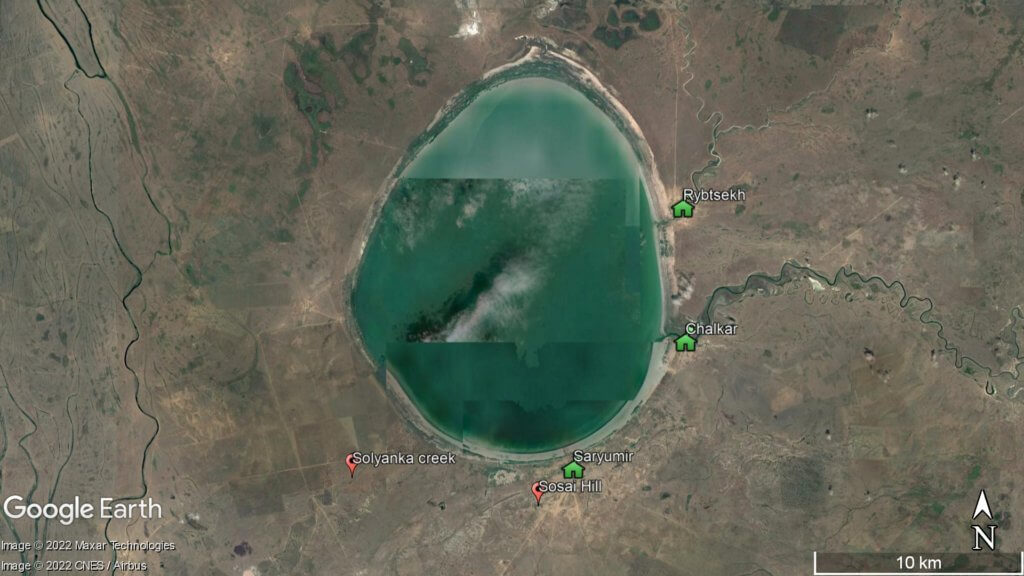 The egg-shaped Shalkar Lake is south of Oral (aka Uralsk). The brackish lake measures 15 x 18 km and is fed by two rivers on the east side: the Sholakankaty (Шолаканкаты), beside Rybtsekh village, and the Izenankaty (Изенанкаты) near Chalkar village. In the southwest there’s also the Solyanka, which is a seasonal creek. The average […] 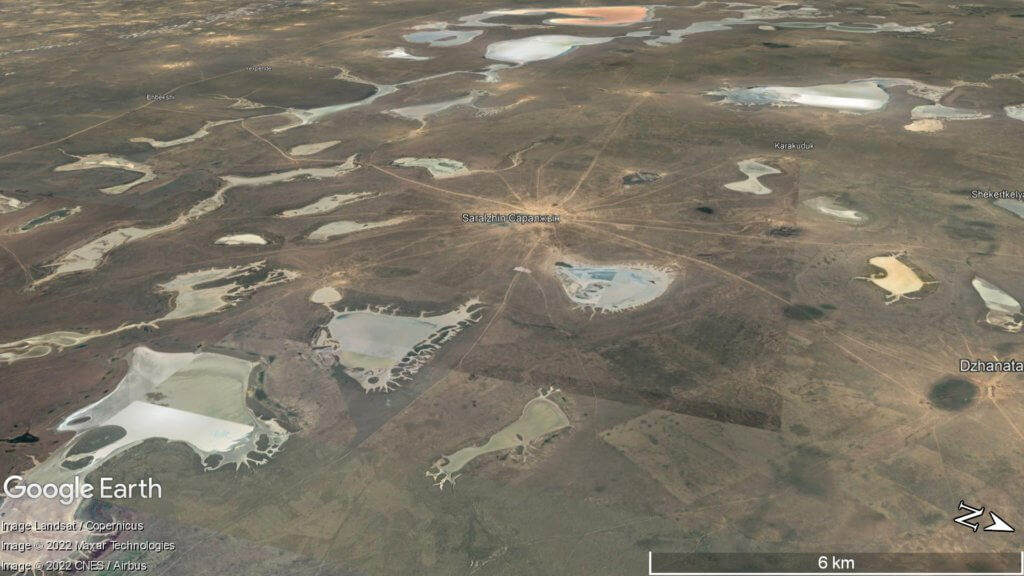 At the northern edge of the Ryn Desert is Kamysh-Samara. The 100 x 60km plain was once home to at least a dozen lakes, with Aralsor–the largest one–measuring 13km wide. Today, most of the lakes’ water levels have decreased significantly and turned into dry salt pans. The decline of Kamysh-Samara’s lakes are due to a […] 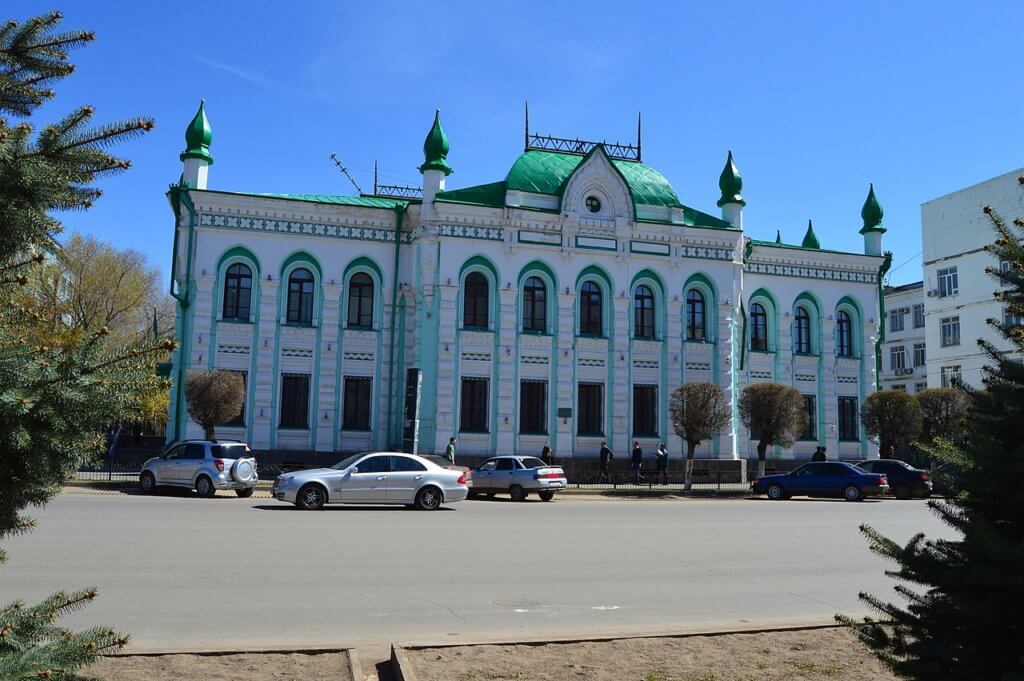 Ural Cossacks founded Oral (aka Uralsk in Russian) in 1584. To establish it, they had to oust the Mongol Nogai Horde from the area. Throughout the 16th century, vast tracts of western Kazakhstan, including the Volga River basin, were under the Nogai’s control and the Cossacks spent the 1570s battling them over their territory. After […] 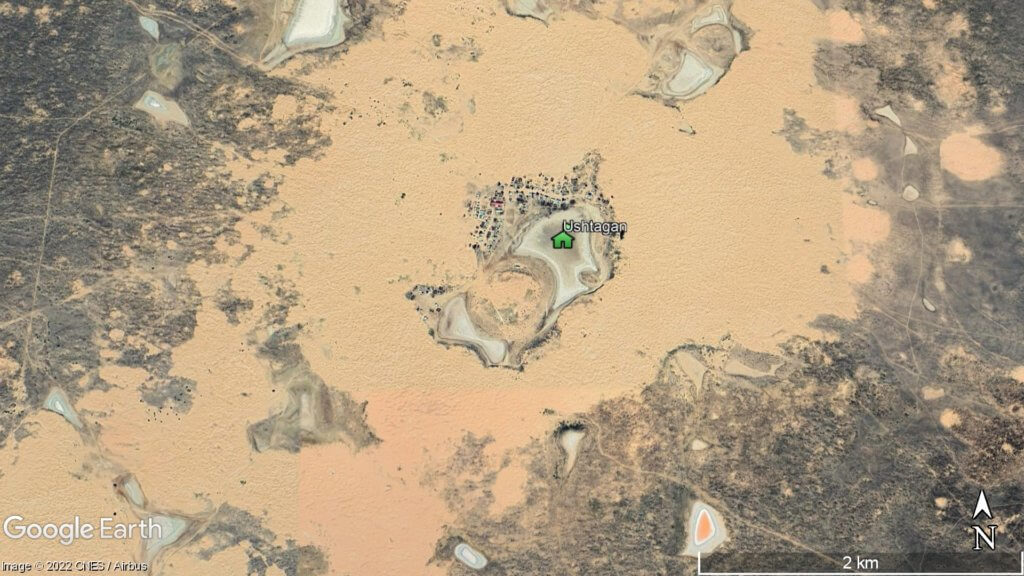 The Ryn, also known as the Naryn Sands, is Kazakhstan’s westernmost desert. It spans for over 350 km between the Volga and Ural Rivers, and over 250 km from the Caspian Sea’s north coast to the edge of the Pontic-Caspian Steppe. Desertification in the Ryn Desert The southernmost strip of the Ryn is sometimes referred […] 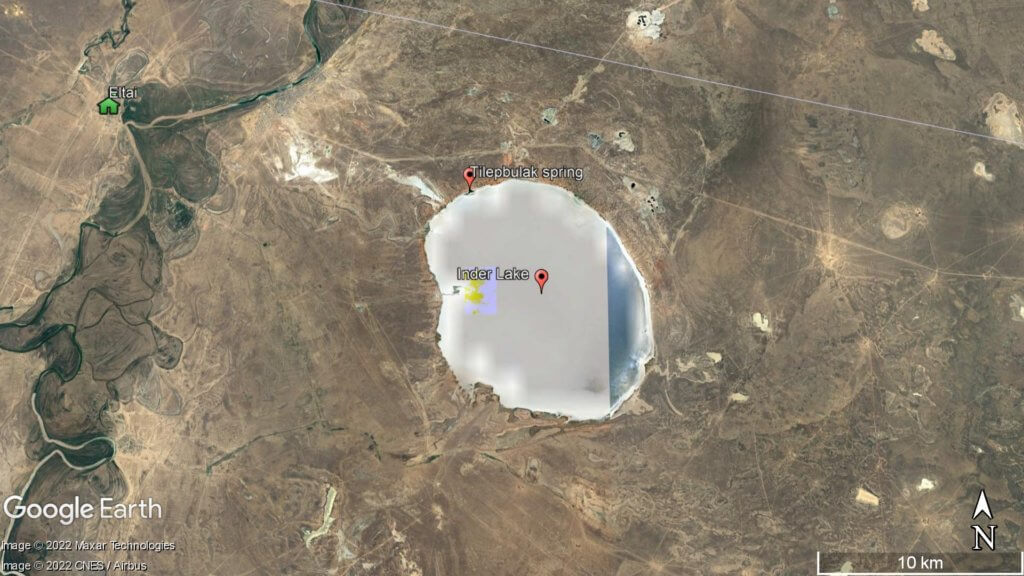 Less than 20 km east of the Ural River is Inder Lake. It’s the second largest lake in western Kazakhstan after Shalkar Lake, which is south of Oral city and 230 km+ to the north. Springs and groundwater flowing from the nearby Inder Mountains feed the 10km-wide lake, particularly in the spring with snowmelt. Although […]