The Ryn, also known as the Naryn Sands, is Kazakhstan’s westernmost desert. It spans for over 350 km between the Volga and Ural Rivers, and over 250 km from the Caspian Sea’s north coast to the edge of the Pontic-Caspian Steppe.

Desertification in the Ryn Desert

The southernmost strip of the Ryn is sometimes referred to as the Menteke Sands*, which extends either side of Isatay village for over 50 km. Desertification is an issu­­­e in Isatay, as well as Zineden village which is 8 km to the southeast and overlooks Zaburunye Bay on the Caspian. In a 2021 news report by Kazakhstan’s Khabar 24 TV channel, on the impact of desertification in the Atyrau Region, it was said that frequent sandstorms force residents to shut their doors and windows for up to eight months a year.

Isatay’s and Zineden’s residents say the increase in sand is due to the Caspian Sea level decreasing, leading to exposed sections of the sea bed getting blown inland. Undoubtedly overgrazing has played a part too. Photos by NASA Earth Observatory show just how aggressive the dune-growth is. In 2001, a dust storm around the Baltic Sea was shown to have originated in the Ryn Desert.

Desertification is an issue elsewhere in the country. The Aral Sea and other regions in the west, such as Mangystau’s Senek village, are all facing similar problems. Fortunately, Kazakh authorities are working hard to combat the effects of desertification in the country by planting saxaul trees to limit erosion. So far, over 3,000 have been planted around Isatay and Zineden.

The Ryn Desert’s total population is approximately 120,000 people, with 75% based in the southern half (Isatay and Kurmangazy Districts). The Bokey Orda and Zhankala Districts make up the northern half. Most settlements are located in the desert’s outer perimeter, leaving much of the interior isolated.

The village of Kyzyluy (aka Kyzyl Ui), meaning “Red House” in Kazakh, is 80 km northeast of Isatay village and one of the Ryn’s most well-known settlements. During the Soviet era, Kyzyluy acted as the administrative hub for collective farms in the Ryn. From the 1960s to 1980s, dozens of local shepherds and farm workers were awarded medals from the USSR for their agricultural productivity. Khatima Dayirova, who managed the farms for two decades, was also awarded the Order of Lenin.

Today, Kyzyluy remains an important administrative hub for the Isatay District’s 80+ desert farms. In 2018, Murat Bektenov, an oil worker born in the area, published The Red House is My Home (Қызыл үй – менің мекенім). The book covers the history of the village and other settlements nearby, such as Tuschykuduk (fka Chapayevskoye) and Aybas.

When walking around the desert, keep your eye out for Agriophyllum, which is a short, green and spindly plant. It’s locally known as kumarshyk and looks somewhat like thyme. Despite its humble appearance, this plant is a literal lifesaver. During periods of war and famine people living in the Ryn would roast, bake and mill its seeds, and make porridge from it. This plant is so well-regarded locally that Bektonov published a book dedicated to it, called Kumarshyk, which details its historical usage. Atyrau scientists have also patented a drink combining kumarshyk with fermented camel’s milk.

In 2021, Kazakhstan’s government announced a plan to create the Bokeyorda Nature Reserve. The reserve is expected to cover an area roughly the size of Los Angles–657,000 hectares–and aims to protect saiga from poachers.

Despite the arid landscape, the Ryn has plenty of groundwater which has enabled settlements to flourish in the desert for millennia. As a result, the area has a rich and diverse human history that begins with Stone Age hunter-gatherers. Later on, they developed into settled cultures centred on agriculture and animal husbandry. Examples of these groups, between the 4th to 2nd millennium BCE, include the Yamnaya culture, Catacomb culture, and the Srubnaya culture.

From the 1st millennium BCE to 5th century CE, Iranian language-speaking nomadic groups dominated the area. These were, in order of occurrence, the Scythians and Sakas, Sarmatians and Thyssagetae, and the Alans. They were succeeded by various semi-nomadic Turkic khanates run by the Göktürks, Onoğurs, and the Khazars (6–10th century), the Cumans (10–13th century), and the Mongol Golden Horde and the Great Horde (13–15th centuries). After that came the Nogai Horde, who controlled large sections of western Kazakhstan and the Lower Volga, until they were defeated by the Kalmyk Khanate in the early–mid 17th century. During this period, Russian influence in the area increased.

The last khanate in Kazakhstan ended in the Ryn Desert, with the death of the Bukey Horde’s leader, Zhangir Khan, in 1845. The Bukey Horde (est. 1801) was an autonomous Kazakh Khanate that arose after the Kalmyks agreed to be annexed by Russia in the 1770s. The village of Khan Ordasy, at the north-western rim of the Ryn, was its capital.

According to the Atyrau Regional Center for the Study of Historical and Cultural Heritage, there are approximately one thousand sites of historical interest in the Naryn Sands. Russian archaeologist Ivan Sinitsyn and his team undertook the first comprehensive study of the region in the 1940s. On the shores of Soraydyn and Raim lakes, which are located at the northern edge of the Ryn, near Novaya Kazanka village, they discovered pottery and arrowheads from the Middle Stone Age to Copper Age*.

Since Sinitsyn’s pioneering work, a steady stream of Russian and Kazakh archaeologists have explored other parts of the Ryn. In 2020, a team from Kazakhstan’s Institute of Archaeology examined a section of the desert, in Bokey Orda District, and unearthed 50 new Stone Age sites. Most were concentrated around wells, the coast of salt lakes, and ancient river channels leading to the Caspian. One particularly abundant site for artefacts was the dune region southeast of Khan Ordasy village. There they discovered 150+ micro-blades and arrowheads made of quartzite sandstone and siliceous rock.

In the southern Ryn, a 2019 expedition by Atyrau’s local history museum recorded over 150 sites of historical, archaeological, or architectural interest in the Isatay and Kurmangazy Districts. The most significant were several dozen Early Iron Age burial mounds and fortresses near Asan, Ushtagan, Azgir, Myntobe, and Kyzyluy. Coordinates for their finds are published in their extensive Naryn Sands archaeological exploration report.

*Ivan Sinitsyn’s archaeological expedition reports, for the western Kazakhstan and Lower Volga regions, are published in the The Institute of Archaeology of the Russian Academy of Sciences’ journal (Институт археологии РАН): (1) Edition 37, pp. 97–105; and Edition 45, pp. 62–73. A chapter overview for every Институт археологии РАН journal edition, since its establishment in 1939, is available here. Other journal editions are available for download here. Nina Morgunova’s paper on Copper to Early Bronze Age pottery in the region is a worth a read too.

Besshoky (aka Bish-choho) is a salt dome, measuring 10 x 3.5 km, and is located 30 km east of the Russian border in a remote corner of the western Ryn. It rises up to 30 metres in height and has several caves in sections of its gypsum caprock.

Speleologists from Astrakhan, Russia, were the first to explore the area in 1987. A decade later, the Russian Geographical Society undertook four comprehensive research expeditions to the area and discovered Besshoky’s largest caves to date: Kenenbay, Mechta, and Kurmangazy. Of the three, only Kenenbay was previously known –to local herders– and the other two were new finds. Mechta is the largest, measuring 30 x 15 x 5m, and all feature beautiful gypsum stalactite formations.

Access to Besshoky is via a dirt road near Kyzyldzhar’s N7 train station. Follow it north for 120 km to reach Besshoky. From there, the road continues northwest for 280 km+ to Khan Ordasy village.

Bokey Orda District is Kazakhstan’s westernmost district and shares a border with Russia’s Volga and Astrakhan Oblasts. Its landscape is a mix of Ryn desert scrubland and dunes, and the Pontic-Caspian Steppe. The district’s most interesting sites are in and around Khan Ordasy village (aka Urda or Orda):

How to get to the Ryn Desert

From Atyrau, you can drive to the south-eastern corner of the desert, around Kyzyluy, in three hours. Isatay is a five hour drive from Atyrau. Along the A-27 road, which connects Atyrau and Isatay to the Russian border, there are numerous dirt roads leading into the desert’s interior. If you’re in the far western Ryn, make sure you don’t cross accidentally into Russia!

The A-28 road runs along the desert’s eastern edge, between Atyrau and Inderbor, with a multitude of turnoffs into the desert. On the outskirts of Eltai, which is across from Inderbor, there’s a well-used dirt road to Zhankala town. From there, it’s a 4-hour drive on the R-97 road to Khan Ordasy. The distance is over 200 km, and the road divides the northern Ryn with the eastern Pontic-Caspian Steppe. 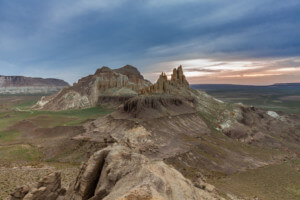 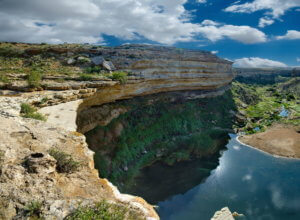 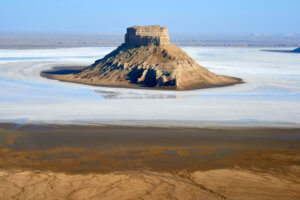